Rails across the River:
A History of the Rail Car Ferry Service On the St. Lawrence River Between Prescott Ontario & Ogdensburg, New York 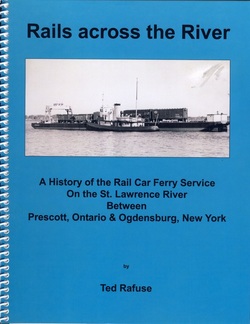 The Prescott, Ontario – Ogdensburg, New York, rail car ferry service transferred rail cars across the St. Lawrence River for more than a century. Rails across the River outlines the involvement of several American and Canadian rail companies at diverse times which were involved in providing rail cars for the cross river service. Canadian lumber and livestock and American coal and merchandise provided much of the material transferred. For several decades the glamour transfer was the cross river shipment of Oriental silk, raw silk, and silk goods shipped by steamship to Vancouver then conveyed by the Canadian Pacific Railway across Canada to Prescott where the cargo was transferred across the river to Ogdensburg. Commodities were then moved further by rail to destinations in New York City and environs.In Rails across the river, Rafuse weaves a marine narrative of this remarkable transfer of rail cars involving the vessels Boston, St. Lawrence, Transit, William Armstrong, South Eastern, several car floats, the Charles Lyon and the final duo of the tug Prescotont and car float Ogdensburg. Revelead for the first time in book format are the marine mishaps caused by man and nature as well as the triumphs of men and ships.