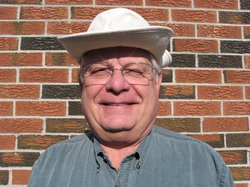 Ted Rafuse has held an interest in railways for many years. At the age of five an uncle began to  send Christmas presents of Lionel model trains and equipment. As he grew older he learned that a deceased grandfather had been roundhouse foreman at Point Tupper, Nova Scotia and this knowledge led to family research into the realm of real railroading. As an adult, he graduated from Bishop’s University with an honours degree in history and commenced teaching history in Cobourg. With several colleagues a local history course was developed and he discovered then the rich local railway history of the area.  In his mid thirties he was introduced to HO scale model railroading. Several learning layouts were developed but none were fulfilling. This dissatisfaction led to the idea of modelling a historical, but long abandoned, local railway. While at work on his version of the Cobourg & Peterborough Railway, set in the early to mid 20th century, he sought information about the car ferries that crossed Lake Ontario in the early part of that century. A connection with his model C&PRy and the historical Ontario Car Ferry Company ferries he reasoned would make for an interesting model scene.

Modelling and researching fused at this juncture. Quickly he learned that there were few local historical resources available to aid in the knowledge of the car ferry service that had once existed from Cobourg. Ted travelled to the National Archives in Ottawa where he discovered the corporate records of the Ontario Car Ferry Company. Perusing a pay list he recognized the names of local men who had once worked on the boats. Contacting them and listening to their experiences on board led to the thought of writing an article and submitting it to CNLines, a periodical whose focus is Canadian National Railways and its predecessors lines. Once that was completed Ted believed there was more to be told. The final story in the saga was the inspiration to write and self-publish a book on the subject. Coal to Canada: A History of the Ontario Car Ferry Company became his personal millenium project and was published in March 2000. Unfortunately this volume is out-of-print but occasionally copies appear for sale at www.abebooks.com. Just type in the title, Coal to Canada to learn if any copies are available from an antiquarian book dealer.

Ted continued his interest in research and writing local railway history and several years later, early in 2005, published. Wooden Cars on Steel Rails: A History of the Crossen Car Companies of Cobourg, Ontario. This volume continues his research into local railway history and chronicles the history of Canada’s largest independent manufacturer of wooden railway passenger and freight cars during the period 1867 through 1915. Further information on this book can be found elsewhere on this site.

Also published in 2005 A Railway to the Isle: A History of the Strait of Canso Railway Car Ferries 1890-1955 relates the history of the railway ferry service between the mainland of Nova Scotia and Cape Breton Island. As a youngster visiting his grandmother in Port Hawkesbury in the 1950s Ted witnessed the operation of the Scotia I and Scotia II from the hill above the Point Tupper railway yard. As well he watched the construction of the Canso Causeway from the hill above Port Hastings. When the Canso Causeway was opened in 1955 it created a permanent land link eliminating the need for the railway ferry service. His book is a history of the Strait of Canso railway car ferry service. Further information on this book can be found elsewhere on this site.

Ted writes and contributes articles on contemporary and historical rail activity to several periodicals devoted to these topics. As well he contributes items to magazines devoted to model railroading. His contributions in this area are listed elsewhere on this web site. On the modelling front progress continues on his Cobourg & Peterboro’ Railway home HO layout. Also Ted has completed a portable 4 by 6 foot layout depicting the Cobourg & Peterborough Railway  in the 19th century. One side depicts a segment of Rice Lake Bridge in the 1850s on one side and the opposite side illustrates a facet of the Cobourg Peterborough & Marmora Railway & Mining Company ore loading trestle at Cobourg harbour in the early 1880s. This layout is available for viewing by local interested groups who contact Ted for information regarding arrangements to set up the display.

After a hiatus of a decade Ted once again prepared his third volume on the topic of Canadian rail car ferries. This most recent self-publication is entitled Rails across the River: A History of the Rail Car ferry service on the St. Lawrence River between Prescott, Ontario & Ogdensburg, New York. This book was prompted by a friend who cajoled him into researching this topic. Once Ted started on the research he became hooked on the project and several years of research and writing later this new volume was ready for the public scrutiny. The book is available through the order form on this web site.