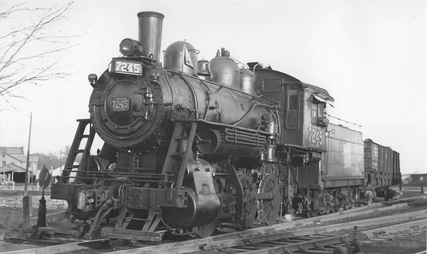 The above image illustrates the focus of  Ted Rafuse's STEAMPOWER PUBLISHING namely the appreciation of the many facets of steam railway operation on past and present Canadian Railways. The late Jim Walder, a former education colleague and avid photographer of transportation images from the late 1940's until his premature death in the 1970s snapped the above 0-6-0 switcher in the Cobourg Yard in August of 1953.

Ted Rafuse is the owner of this web site and he encourages you to take the time to peruse the information revealed with the buttons to the left. The focus of STEAMPOWER PUBLISHING is to provide the reader with an appreciation for the many facets of steam railroading on past and present railways. Author and Publisher Ted Rafuse is a seasoned researcher and publisher who not only focuses on the railway but also on the men and women who made them work. STEAMPOWER PUBLISHING is a small publisher but already has printed 3 titles which have met with market success. New titles (see Research Projects) are under way. In addition to authoring books, Ted has written numerous articles for Canadian railway and model publications (see Published Articles).

Ted maintains an ardent interest in research and writing on several facets of Canadian steam railway history. He has authored and self published several volumes on this topic as well as contributed many articles on a variety of historical steam railway related writings to several journals. He continues to research and write manuscripts for future volumes. Ted is interested in HO scale model railroading and has similarly written and had published a number of articles in several model railway magazines.