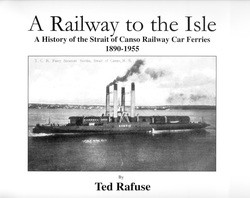 In A Railway to the Isle A History of the Strait of Canso Railway Car Ferries 1890-1955 author Ted Rafuse captures the saga of the nautical railway link on the Strait of Canso that once connected the port of Mulgrave, Nova Scotia, on the mainland and Point Tupper on Cape Breton Island. The railway ferries SS Mulgrave, SS Scotia I and SS Scotia II chronicle this unusual connection from its Intercolonial Railway beginnings through Canadian National Railways operation. Both rail and marine operations associated with the cross Canso service are chronicled through the use of many previously unpublished photographs, diagrams, maps and personnel recollection.. The author has a family kinship to the area as his grandmother lived in Port Hawkesbury and his grandfather, deceased before Ted was born, was roundhouse foreman at Point Tupper. As a youngster during the 1950s he often watched the Scotia vessels in operation from the hill above the Point Tupper rail yard. During the same period he witnessed the construction of the Canso Causeway. With the opening of the causeway in 1955 the railway car ferries became redundant, ending a rail-marine service which operated for three generations. This book reflects a part of the author’s youthful memories supplemented by research documentation and images.